Saint Augustine is a rock band with shoegaze, indie, and hard rock roots and a strong love of the original in music. We delight in adding new textures to the tradition of rock songwriting and performing. The music can be soundscapes which yield to the weight of anthem rock, and our gentle ballads surprise with rapid volume bursts of angry guitar. The band includes the talents of Alex Roberts (Affirming the Consequent, Early Black), Barry James (solo artist, Affirming the Consequent, The Sunflower Conspiracy), Jimmie Newton (The Gary Bonnet Band, Affirming the Consequent), and Scott Knight (The Tangelos). 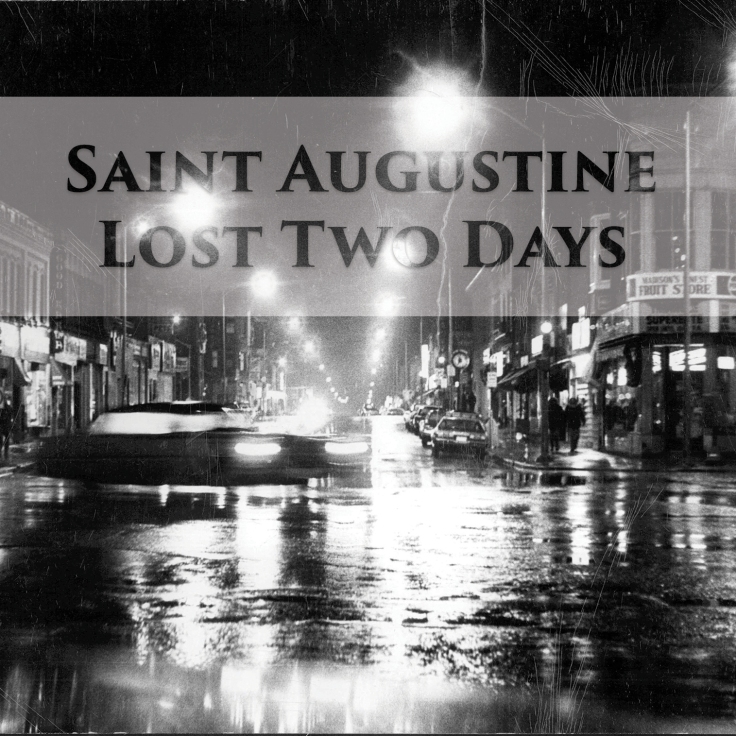 Dreamy and mesmerizing, the soundscapes of Saint Augustine will take you back to that long-ago afternoon when you laid down in the dark to listen to that new LP. Nothing was more important than this: taking the time to let the music wash over you and absorb every note. You might have paused at the end of the first side, letting it all soak in before getting up to flip the disk over.

This album is not a couple of pop songs separated by filler, but a complete work meant to be experienced as a whole. Each song stands on its own, but together they combine to form a story that unfolds like the chapters of a favorite book.

Saint Augustine’s distinctive sound is the product of four individual approaches to making music. Members of the band are largely self-taught, and this background leaves them with the freedom to experiment and create without bias or preconceived ideas. Produced and recorded by Jim Waters (John Spencer Blues Explosion, Calexico, Sonic Youth), the airy, ethereal vocals, melodic bass hooks, layers of textured guitars, and deft, versatile drumming combine to form the unique and engaging Saint Augustine rock sound.

“I’ve always appreciated the colors in paintings more than the subject,” says bassist Alex, who names The Cure’s Disintegration as his favorite LP to spin in the dark. And the instrumental is the focal point. “There are songs I’ve heard (and performed) dozens or hundreds of times to which I do not know all the words,” he admits.

For Barry, lead guitarist, it is a bit more complicated. Responsible for Saint Augustine’s lyrical landscape, he creates characters in an intricate world. These personalities move through musical settings that are multi-layered and symphonic. These characters may have come to him as a teen, as he lay in the dark listening to classical LPs or Synchronicity by The Police. The details of these haunted lives developed as he scraped to make a living as a young man in New York City.

Scott remembers listening to Pink Floyd’s The Wall cranked sitting in his friend’s truck equipped with a super kick-ass stereo system. He was moved by the engulfing sound of “Run Like Hell” which has strongly influenced his use of guitar effects as a tool to create atmosphere and texture.

Jimmie’s drumming style has developed over the years through his wide experience of playing rock, country, and metal. His versatility, creativity, and range are evident in his stylistic choices, from gentle and subtle to powerful and driving.